Prime Minister Malcolm Turnbull announced on Tuesday that Australia will kill off the 457 temporary working visa program, replacing it with a new framework with fewer spots and more stringent requirements. But if you’re one of the 95,000 people currently in Australia on a 457, or held out hopes for some day working in Australia, what does that mean for you? 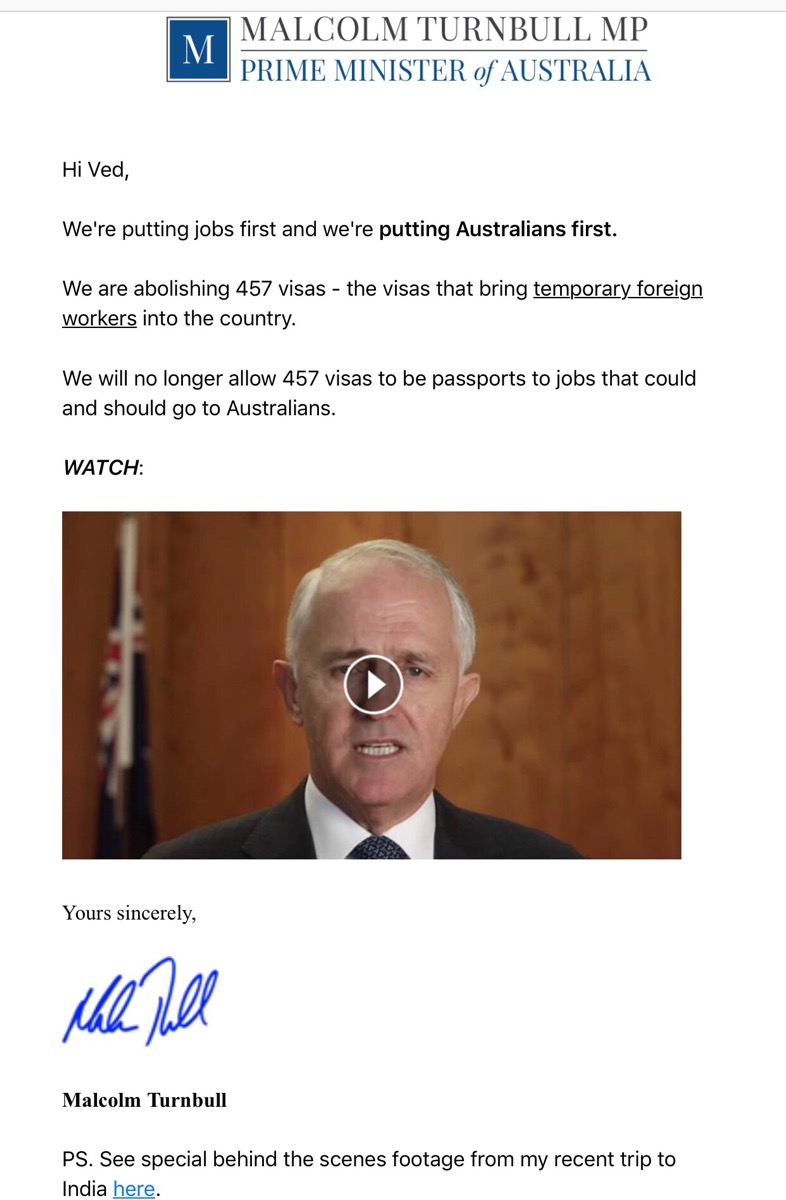 Well the full name is Temporary Work (Skilled) visa (subclass 457). It’s a visa for foreign citizens, which “lets a skilled worker travel to Australia to work in their nominated occupation for their approved sponsor for up to four years.” Workers have to be sponsored by an Australian business, with the business having to prove they couldn’t find a suitable Australian worker to fill the job.

The 457 program has been a target of the federal government for some time, with claims Australians were missing out on jobs to foreign workers. Immigration minister Peter Dutton signalled last year that the government was looking to scale back the number of industries eligible to host 457 workers, but the sudden and absolute axing of the program was unexpected.

What Are The Changes?

For a start, the 457 visa sub-class will be abolished entirely. It’s gone. In its place will be two new visa programs, one two-year and one four-year, called the Temporary Skill Shortage Visa. The new visas will come into force in March 2018. While more than 650 jobs are currently available for 457 holders, that number will be reduced by 200 under the new program.

The new visa classes will have higher requirements than the current 457 program, including:

“These new visas will ensure that Australian businesses have access to the workers from overseas they need to fill real skill gaps, but not otherwise, and that Australians, wherever possible, where vacancies are there, where opportunities are there, Australians will be able to fill them,” Turnbull said in Canberra on Tuesday.

More broadly, holders of the new visas will not be as easily able to apply for permanent residency as 457 holders are, according to Dutton. He said getting a 457 visa “results, in many cases, in a migration outcome, somebody going into permanent residency and becoming a citizen” but that under the new system, “there won’t be permanent residency outcomes at the end of [the two-year visa]”.

It is also going to cost employers more to sponsor a foreign worker, with the fee for a four-year visa more than doubling to $2400 and a two-year visa to be $1150.

Turnbull said the new system would be “conducted in the national interest to put Australians and Australian jobs first”, a mantra he repeated several times during the press conference to announce the changes.

While the new visas won’t come in for almost a year, some changes are happening from tomorrow. In its announcement, the government said it would be “significantly condensing the occupation lists used for skilled migration visas, including the subclass 457 visa, from 19 April 2017.”

What About Those People Already On 457 Visas?

The good news, for the 95,000 of you who the PM says are already in Australia, is that you’re not in immediate danger of deportation. Turnbull said those already on 457 visas would be protected from the changes.

“For those people here on a 457 visa at the moment, there will be a grandfathering arrangement. They will continue under the conditions of that visa,” he said.

Why Are These Changes Being Made?

The Coalition government has been hammering the 457 program for many months, criticising the former Labor government — which left office in 2013, we must remind you — of allowing the program to swell and include too many jobs. There have been claims that Australian workers are missing out on jobs to foreigners, and the government has been slowly paring back the industries eligible for 457 workers. In March, the fast food industry was barred from sponsoring foreign workers under the 457 program.

“The Aussie kid shouldn’t be knocked out of the job by a foreign worker, which is what Bill Shorten did,” Dutton told the Daily Telegraph just last month.

Turnbull has painted the 457 abolition as a win for Australia, repeatedly pushing a Trump-esque “Australia first” message.

Well, for current 457 holders, don’t stress. Your visas are safe. The trouble will come when 457 holders want to extend their stay, which they were previously eligible to do. Turnbull and Dutton did not elaborate much on the situation for these foreign workers, simply saying their visas would be grandfathered — it is unclear whether they will be able to extend their stay under the 457 program, or whether they would be shifted to the new temporary visa program when their current visa expires.

We don’t know the impact of the changes. Many 457 workers are cooks, managers, farmers and labourers — but many people on 457s also occupy fields like medicine, technology and education. How much will the changes affect these fields, and does Australia have the workers needed to fill any gaps?

We also haven’t got much on how much higher the barriers to entry will be for the new program, or how many places will be available. Turnbull said English requirements would be raised, as well as more stringent criminal and background checks. We don’t know which criminal offences (if any) would disqualify someone from getting one of the new visas, or what English qualification the worker will need. We don’t know what “mandatory labour market testing” yet entails, or how it affects someone’s eligibility.

We’re also not much wiser about exactly how many visas will be available, so it’s unclear exactly how big an impact this change will have. Is this going to lead to many more jobs for Aussie workers, or just a few? These details are sure to come out in coming days or weeks, but at this stage, there are still several questions needing to be answered.